Roots Quartet and Yvette Staelens albums and songs can be downloaded from cdbaby, Spotify and iTunes. 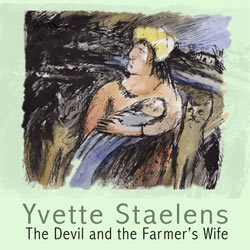 The Devil & The Farmer's Wife

Roots Quartet, darlings of the English folk scene, like to explore. This is a fabulous collection of songs and a personal view of farming today, interwoven with fun, folksong and fantasy. Rambling English countryside, ancient towns and villages, summer folk festivals and midwinter solstice gatherings have all hosted the delicious harmony singing and superb musicianship of Yvette, Michelle, Abbie and Bronwen.

Following Abs and Bron, Yvette has now produced her own album inspired by, and richly embedded in, the verdant rural landscape of Somersetshire. It's a view from the Somerset farmhouse kitchen window and a visit to those carefree days when we all did things just for devilment!
Go on sample some "Farm-folk" you know you're worth it.
This album includes gorgeous original illustrations by Kate Lynch .

Review The Devil And The Farmer's Wife (RQ Records)

Yvette may be known to some readers as one half of the perversely contrarily-named Roots Quartet, who for the past 20 or so years (albeit in several wildly differing incarnations) have been ploughing their own unassuming yet individual folky furrow down in Somerset with occasional forays into touring folk venues nationwide ...

...The "band" as such is "resting" at present, it would appear, while Yvette concentrates on other activities such as being a farmer's wife and leading singing workshops etc. - and presumably promoting her latest CD release. It's nominally a solo album, but it also features various instrumental and vocal contributions from Yvette's long-term collaborators Abbie Lathe & Bronwen Harrison (both ex-RQ) and Michelle Hicks (present-day RQ), with Nigel Pope, Joanna Harvey, Jane Harwood and Shirley Screech.

The CD presents an almost casual little programme of what Yvette calls "farm-folk", a sequence of eight songs, all of Yvette's own creation (and by the way, it does not include the song you might expect from the album's title!). These compositions serve to bring to our attention the plight of the modern farmer through intriguingly-crafted observations on the rural way of life which build upon the legacy of English folksong. Not exactly in the manner of Show Of Hands, although the press release hints at a comparable sensibility in Yvette's take on matters rural. I suppose you might say that the nine tracks form a kind of patchwork of fields growing contrasting crops ... and together, the collection is described as "a personal view of farming today, interwoven with silliness, folksong and fantasy".

The opener, Crazy Aunt Cottage (ostensibly a kind of new-age lullaby, but its stridency is more likely to keep the babe awake!) doesn't quite connect for me, but thereafter we get down to business with some simple yet powerful commentaries and I love the rest of the album. The Bluebell Herd was inspired by the FMD catastrophe, The Sea And The Soil examines (in divine vocal harmony!) the true cost of food and the concept of wastage within the global economy, and - probably finest of all - the solo acapella Who Understands The Land? persuasively addresses our underappreciation of farmers. Sedgemoor 1685 is a stirring vision of "the pitchfork poor called to war", and Road To Araby a kind of farmer's wishful dream I suppose, while the stark tale of The Greyman (a co-write with Abbie) is a concise Lied-like highlight. In complete contrast, Patio Song is a deliciously vengeful barbershop-style ditty inspired by a local wifebeating! Finally, there's an unpretentious instrumental interlude in the form of a simply-conceived piano arrangement of Pretty Nancy.

This disc has a very appealing homespun cottage-industry vibe, and Yvette's songs all have something important to say.

Peace, warmth, good company and song, the perfect combination to protect and comfort against the biting winter chill.

We have really enjoyed assembling this collection of songs to celebrate the customs, traditions and religious celebrations that have settled upon the midwinter solstice. Please sing them too!
Now take some rest, pour yourself a cup of good cheer and cuddle up. Wassail! Yvette, Michelle and Bronwen: Roots Quartet.

Review 'Gift of Music' - a review of Songs of Frost & Fire

A SEASONAL gift of music comes in the shape of a new CD from the locally-based Roots Quartet. If the prospect of female vocals floating over cello recorders, keyboards and guitars sets your heart aflutter, 'Songs of Frost and Fire' is for you.

Besides the European influence on this CD there is also some honest experimentation and new songwriting which sits not just comfortably alongside the tried and tested but head and shoulders above it.

This mix of a capella and instrumentally augmented songs adds up to a celebration of the seasonal that Ashley Hutchings or John Kirkpatrick would also be proud of ... but it is also a celebration of woman power. Songs of Frost and Fire simply bursts with energy. With gorgeous harmonies and heart-warming melodies. And it all seems do effortless ... even for a quartet of three.

Following a forceful opener and the sustained mellowness of The Holly and The Ivy, the trio can no longer contain themselves as they burst into the lush lullaby of A La Nanita Nana, a joyous Spanish carol. Then having secured the future of all the apples in Gloucestershire with a lively attack on the customary wassailing song, the album springs the second of its several surprises with Lovely Mary, a delightful instrumental on keyboard piano which although freshly composed sounds as familiar as church bells on Sunday. Despite its beauty, Lovely Mary turns out to be a gateway to the album's centrepiece, Robin and Marian, in which an exquisite fragile breathy lead vocal is pursued (through the forest) and ultimately entrapped by some insistent recorder playing. Despite nudging the six-minute mark, Robin and Marian is not a second too long. The CD is worth acquiring for this alone and if Songs of Frost and Fire attracts the exposure it deserves I can see other artists wanting to tackle it. But there are more gems to come. Another new song, Dream, is a clever restless echoey a capella while Peace of Night is astonishing, both intriguing and compelling as it juxtaposes something almost spiritual with tidal harmonies delivered with the vocal wah-wah pedal jammed down. As its title suggests, this song contains healing properties. Robin and Marian may be the best song on this CD but Peace of Night is my favourite.

Any album worth its birth leaves you with something memorable and RQ's immaculate closing cover of Snow Falls (a celebration of renewal) demands reverance without straying into overblown grandeur. Like Dylan once did, they suddenly go electric and the recorder is ditched for what sounds like lead-guitar played like a violin to deliver distant eeriness reminiscent of mist on the moors.

I gush, so my reservations are slight, though one concerns the programming, in that an opening song is a win 'em or lose 'em slot, and Diu vi Salvi Regina (whilst no doubt harmonically 'correct') reaches a Corsican stridency which might perturb some English ears. And if you listen to this CD a little too pickily, you may pick up on the odd flaw here and there.

Taken as a whole Songs of Frost and Fire is as welcome as a shot of sloe gin in front of the fire. It is mature but brave, intensive yet familiar, fun but Cecil Sharp authoritative.

Songs of Frost & Fire - 500 Years of Midwinter Song "A performance of sparkling frosts ...and crackling fires"

With their show, 'Songs of Frost & Fire', Roots Quartet bring you delicious arrangements of traditional, period and contemporary songs to celebrate the joy of Yuletide, the revelry of Twelfth Night and the hope of Candlemas. Into warm, full-bodied vocals they add a rich blend of cello, dulcimer and other instrumental spices to create a glow for the hot punch season.
The wonderful harmonies sent shivers down my back whilst the stories of the songs warmed the cockles of my heart. A truly memorable performance! 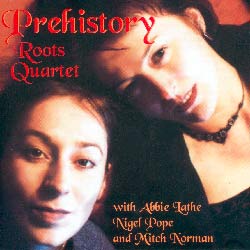 At last, following multiple requests, early Roots Quartet recordings are now available in an album.
Prehistory features 19 sublime tracks from our first 2 albums (Roots Quartet and Heroines) featuring Yvette and Michelle, guitarist Mitch Norman, guitarist and lutenist Nigel Pope and the exquisite voice and musicianship of Abbie Lathe (recently touring with Maddy Prior as one of "Maddy's Girls").

Making Music gave us a 5 star review for these songs when they appeared in 1990 - we're really pleased to be able to make them available once again! 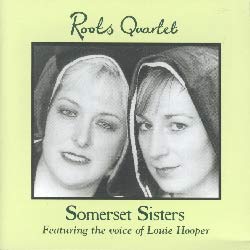 'The icing on an already rich cake comes with the last track which is Green Broom featuring the original singer of the song, Louie Hooper.'
The Living Tradition 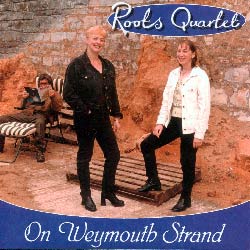 'This is contemporary folk at its best.'
What's Afoot

'On Weymouth Strand suggests that Roots Quartet are consummate experts in their field, entertainers with a faultless, instinctually organic feel for their audiences'
Folk On Tap